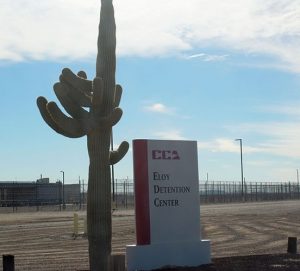 A spokesperson from CoreCivic, the contractor whose workers operate the Eloy ICE detention center, said: 128 of its employees (out of approximately 315 employees) and 244 detainees at the facility have tested positive for the coronavirus since the pandemic began.

CoreCivic says 54 of its 128 workers that have tested positive have completely recovered and were medically cleared to return to work and 110 of the detainees that tested positive are currently under isolation or being monitored, none have died, according to the statistics from ICE, which were last updated on July 8.

At the same time, detainees at Eloy ICE Detention Center are reporting a decline in living conditions, they are kept in their cells for prolonged periods throughout the day due to staff shortage.

Staff members are blaming negligence and supply shortages for the virus’ spread within the facility. They complained the facility pressured workers to stay on the job even if they were exhibiting symptoms of coronavirus and told them to ration protective gloves and masks and water down cleaners instead of using alcohol-based solutions to sanitize surfaces, a former Eloy Detention Center guard told Arizona Central.

In June, a senior correctional officer died from possible complications linked to the virus.
A spokesperson said ICE has begun conducting voluntary testing on all detainees at Eloy and has ceased intake for all new admissions “to further assess the current population and reduce the spread of COVID-19.”

Lawyers from the Florence Project and other activist groups are pushing migrants to be released from the facilities due to the threat of coronavirus.

Most immigrants at the center are awaiting deportation or removal and return to their home countries, while some are being kept at the facility while their immigration cases are being reviewed.