In addition, a Manhattan federal court issued two nationwide injunctions temporarily blocking the regulations issued by the Trump’s administration. These new injunctions will allow immigrant communities to safely access critical health care and public assistance during health crisis. The first injunction prevents DHS from enforcing, applying, implementing, or treating as effective the “public charge” rule for any period during which there is a declared national health emergency in response to the COVID-19. The court also enjoined the U.S. State Department from applying its parallel “public charge” rules to applicants for visas at U.S. embassies and consulates abroad. The second injunction was issued in a separate case challenging the State Department’s public charge rule as well as the president’s Health Care Proclamation requiring visa applicants to show proof of private health insurance. Because of the ruling, immigrants seeking to go through consular processing will not be subject to the public charge test.

Marielena Hincapié, executive director for the National Immigration Law Center, said: “Today the federal courts have once again blocked the Trump administration’s anti-immigrant measures. The court rightly recognized that, in the middle of the COVID-19 pandemic, we must take care of everyone in our country, and that President Trump’s public charge regulation is not just cruel but also dangerous to the health and well-being of our nation. We stand with our courageous plaintiffs in their victory before the court and will continue our work to ensure that everyone — regardless of their race or birthplace — has access to the testing, health care, and economic relief they need. We will only get through this crisis if we come together and take care of everyone in our communities.” 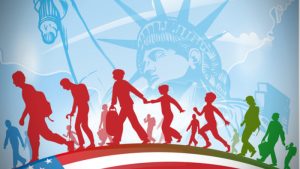 Javier H. Valdés, Co-Executive Director at Make the Road New York, said: “Since the Trump administration announced the public charge rules, it has caused immense harm to our communities — harm that intensified, as our country is in the midst of a health crisis. The public charge rules by both DHS and DOS attacked our loved ones by imposing a racist wealth test on the immigration system, leaving working immigrants to choose between vital services or remaining together with their families. At Make the Road, we have seen the devastating effect this rule has on families scared to seek out healthcare and basic forms of assistance from food pantries and even their children’s schools. We applaud the court’s decision and will continue to fight to stop the Trump administration’s reckless and inhumane attacks on immigrants.”