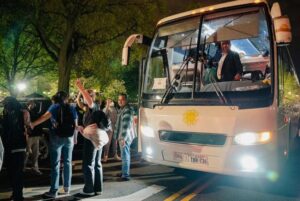 About 7000 migrants have been sent from the southwest border to New York City and Washington D.C. over the past couple of weeks. Texas Governor Abbott is loading buses and sending them north, claiming the program is helping border cities by easing overcrowding and freeing up resources.

In an effort to welcome and provide for the influx of migrants, NYC Governor Adams and D.C. Governor Bowser are requesting federal aid. Currently, the majority of assistance is being provided by non-profits and private organizations. While wanting to welcome the migrants, Adams is critical of Abbott, calling his move “horrific” and accusing him of using “innocent people as political pawns to manufacture a crisis.” Most of these busloads have been sent without warning, which has caused increased chaos for northern governments trying to prepare for their arrival.

Abbott has been under criticism regarding immigration for a long time now, mostly from the Democratic party but even from within his own state. This past April he ordered safety inspections on all trucks crossing from Mexico, which in turn slowed things down and caused “billions of dollars in trade losses.”

Most of the migrants climbed off the buses wearing barcoded wristbands. While Abbott’s staff claim these bands are standard procedure, it’s widely believed they’re intended to frighten migrants into staying on the bus until they arrive at their final destination. As it turns out, many of them were looking for passage to other cities but were deceived into believing they would be taken to those cities just to be dropped off in NYC and D.C. Many others were simply forced onto the buses.

As Texas continues to send more migrants to NYC, Adams strives to keep up with the demand, welcoming many migrants personally. Even with Abbott’s lack of communication, one of Adams’ representatives promises that “Mayor Adams and New York City will continue to welcome asylum seekers with open arms.”